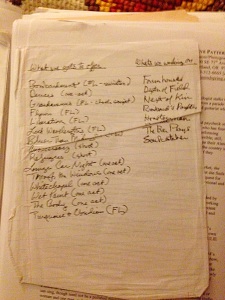 In 1990, having absolutely no idea what I’d gotten myself into, I gathered a cast of eleven actors, together with director Kyle Evans, and staged my performance art piece Controlled Burn in an underground art gallery, accompanied by punk squatters in a derelict Portland, Oregon, office building. Our entire lighting system consisted of a handful of cheap flashlights covered with colored gels and two slide projectors, one of which blew a bulb on opening night. Miraculously, the Portland Oregonian covered the event the next evening, producing a respectable review that compared me to a young Sam Shepard,and dubbed him “a writer to watch.” What your supposed to watch me do remains open to interpretation.

More than two decades later, I found himself at a New York party, chatting with luminaries from the Dramatists Guild of America and wondering how it all happened: the years of late nights; an Oregon Book Award for my seriocomic drama Lost Wavelengths (and being chosen four times as a Finalist for the OBA); co-founding two theatre companies, Pavement Productions (1990 to 2008), and Playwrights West (2009 to present); fruitful collaborations with Stark Raving Theatre (Portland), Jobsite Theatre (Tampa), and Rude Guerilla Theatre Company (Santa Ana/Los Angeles); publication of Liberation, a full-length drama, by Original Works Publishing; a 10-year collaboration with director Lisa L. Abbott; membership in PlayGroup, Portland Center Stage’s in-house playwriting workshop, curated by nationally known dramaturg Mead Hunter; a mainstage selection at Portland Center Stage’s prestigious JAW Playwrights Festival (again, for Lost Wavelengths); a fellowship from the Portland Civic Theatre Guild for my drama Turquoise and Obsidian; and a stint as a regional representative for the Dramatists Guild of America.

Most importantly, through these theatrical advenutres, I’ve been blessed with the work and friendship of an army of directors, designers, stage managers, musicians, and, of course, actors, who more or less make life worth living. Fifty plays…not all of them masterpieces, of course, but all part of fantastic journey.

And it’s not over yet.

See the list below to go to the individual play pages. The pages link to notes on how or why I wrote the play. I love them all, though some more than others. For me, they all have some weird little magic, whether they succeeds artistically or just if they reflect my development as a writer (and where my head was at) at the time I composed them. Some, given the chance, I might rewrite, but one has to balance that with new plays waiting to be written. All have been produced, in one form or another, and have graced me with fantastic experiences and memories. All, I think, deserve to be produced again.

Please note that many of my plays contain mature language, subject matter, and imagery. Though some have been produced at universities, they are not appropriate for most school productions.