When you were a very young child, do you remember how a pencil on paper could change from a line or two here into mountains, streams, your house, a bear, a spaceship? And how all at once, you’d be living in that world, with all kinds of things happening to you. Like watching a movie that you wrote, directed, and starred in. And then you’d take the picture to an adult or older sibling, and they’d go: what is that thing? A duck? Right then, the movie would evaporate. And, the next time you sat down to draw, perhaps it wouldn’t happen quite the same way. Not with the same joy or freedom. Until one day you quit drawing altogether. And now you say: oh I couldn’t draw a straight line. But somewhere, hidden within, the feeling remains: the sense of limitless possibilities, of watching a whole world appear before you. A kind of alchemy. Every artist–or everyone who’s tried being an artist–has experienced their own version of that flash. And the hunger to relive that transcendent moment remains. No matter how we try hide it, from others or from ourselves. LOST WAVELENGTHS is a play about the struggle to find one’s way back, in this case, not about drawing, but about an even more evanescent art form: music.

In LOST WAVELENGTHS, a two-act comic drama with songs, a self-styled musicologist stalks the wilds of “Flyover America” in search of songwriters for his public radio program. From a parade of odd and deluded amateurs, he hopes to spot “Enola Guy”—an elusive, death-obsessed guitarist who never grants interviews or plays in public—and lure him into the open.

Through parallel stories of two mismatched couples on transecting paths, sewn together by TOM’s songs and by a menagerie of strange musicians recording even stranger music for MURRAY’s show, LOST WAVELENGTHS tracks four uniquely American characters—isolated, self-deceptive, but yearning for connection—drawn together by the power of creativity and the lure of discovery. Like a bittersweet Edward Hopper painting set to music, LOST WAVELENGTHS speaks to the narrowly missed possibilities, unsaid words, and unrealized longings that lie beneath the bustle and drive of American life. 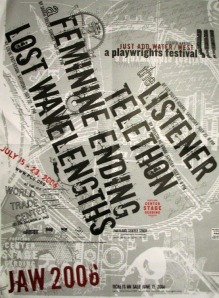 LOST WAVELENGTHS runs approximately two hours with an intermission, can run with live or prerecorded music, and can be staged using three-sparsely defined playing areas: a recording studio, a rehearsal space, and a diner/hotel room. The cast includes two women and two men (one of whom can sing, though need not be a polished musician); the six “outsider musicians” can be played by one woman and one man, or be individually cast. In the DIY spirit of the play, theatres are urged to improvise the play’s songs. Like a musician hitting the pocket live, no two productions of LOST WAVELENGHTS will ever be exactly the same.

Winner of the 2008 Oregon Book Award.

Some plays come out of nowhere. Other arise directly from a source. This one came from a New York Times article about Irwin Chusid’s “Songs in the Key of Z” on WFMU (merely the best U.S. radio station), which introduced me to the concept of “outsider musicians.” (Though I was familiar with art brut.) The idea sloshed around in my head, not going anywhere, until I read a piece about folklorist Alan Lomax, who traveled the U.S. recording folk and blues musicians. I combined an Irwin Chusid with an Alan Lomax, tapped into my background as a radio reporter, leaned on my rabid love of music, and I had a play with an amusing, bittersweet quality that seemed run deep even while it glanced over the surface. Long live Jandek.