Wind: 40 Years After the Fall of Saigon 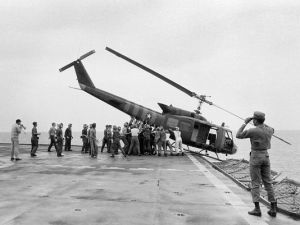 The empty streets. Stunned faces. The last helicopter swings over the trees. And Saigon, for a moment, stops. A city that never stills. The Americans have gone, taking but a few Vietnamese with them. Left behind, men and women who had worked with and lived among and fought with and fought against and loved and hated the Americans. That ends, leaving a space between waves…running over sand. Drawing patterns that last but an instant.

What was that like? That stillness? The wreckage, the debris. People wandering. Stealing things they couldn’t possibly use, just to have something left. And the North Vietnamese, rumbled along the city perimeter. Not everyone was sorry to hear them. Others were beyond terrified.

April 29, 2975. Forty years ago today, and Saigon was no more. It would become Ho Chi Mihn City. The streets got new names—as did some people. Hotels and bars and restaurant took on new owners. But, in truth, Saigon never ends. You can no more snuff it out than you can Paris or Cairo. Only the Americans had gone.

In the weeks, months, years to come, America would turn away. Turn inward. Deep. It would take years before we turned back again. Oh, within a few years the films began—marvelous, harrowing films: The Deer Hunter, Apocalypse Now, Coming Home. Really though, they focused on the height of the American war, during the mid to late Sixties, and some of that was already a decade ago. But displacement, bewilderment, loss: for some time, those things would be too painful to revisit. Except for some determined to rewrite history. Sad news for them: history would not change, and new wars would not refute the old.

The helicopters. That soft whop-whop-whop. It still catches the ear. Such an indelible sound from the time. Coppola used it so evocatively in Apocalypse. So tied to the era. In a way, they wrote the final chapter, fading from the Vietnamese skies and arriving in swarms, commandeered by terrified South Vietnamese pilots, who crammed them full of their families and flew out over the ocean. Not even certain where the fleet sailed: they just flew west until the fuel ran out. Some found the ships (some certainly did not), landing where and how they could. The flight decks grew so crowded with aircraft that sailors had to shove choppers over the edge of the aircraft carriers. They would hang for second, rotors turning as through trying to catch air, before they fell, hit the water, and vanished.

I watched it. Not even knowing what I was looking at. Me and my dad—a World War II vet. He was a journalist, I was one in training. We couldn’t look away from the television, except to briefly glance at one another. I’m sure my face was stunned; my father’s was stone. My mom stayed away, working in the garden—her way of dealing with grief. I didn’t know enough to even feel the loss. To me, it was a fantastic news story. History, right in front of you. I felt something, but I didn’t know what. I think I’ve spent much of life trying to figure it out. Years later, as a writer, I dove into it—maybe too deep for my own good, at times. Some things, learned, cannot be revoked. Hell, I still don’t know anything. I read some books, talked to some vets (always a gift), and did some heavy imagining with some incredibly gifted artists, who gave me a lot more than I ever gave them. But, in context, with those who were there, it’s nothing. I haven’t even lived. Even if I had, Vietnam’s a moving target: it not only changes with each person—it changes as each person does.

Doesn’t everyone have a war story? Whether they’ve served or not. War enwraps us, becomes a touchstone: a clue as to where we are, who we are. Age divides us. Young men and women who served—or remembered—World War II looked at that war in a very different context than those who nervously watched their draft numbers—or those of their husbands, brothers, sons—during the Sixties. If you were below 30 (or thereabouts), you learned you couldn’t believe things. What you heard, saw, felt. You not only began to question the government—not a difficult stretch, after a certain point—but you began to doubt your parents, relatives, and their friends. All the people who, for so long, had been mentors, trusted advisors. Who had loved us. Now, you’re weren’t so certain they did. And the reverse was true.

Some who lived through World War II spoke movingly of the era’s camaraderie, even if they wouldn’t discuss the ghastly reasons for rearranging their lives. Those who lived through the crucible of Vietnam spoke of a different camaraderie: a dividing into tribes—for or against, served or ducked or protested, saw combat or a desk. And those were not static categories. The young man jacked for war by movies and fantasies could well come home to stand with protestors. Like that was easy.

When it was over—for America—the tribes never really came together again. There’s always been a split here between left and right, for reasons that fill thousands of books, and it might take another generation or more to as least partially repair that rupture, if indeed it can be bridged. Maybe World War II was the anomaly and division has been the actual nature of those supposedly united. For a country that worships liberty, we’ve spent a good part of our history throwing chains around one another.

Now, we’re farther away from the fall of Saigon than our fathers were from their war when the first Marines shipped off for Da Nang. Beards and ponytails have a lot of gray in them. Once overwhelming new singles, flashing with brilliant, fresh sounds and ideas—they’re oldies. Crazy books people fought over are standard fare in college. People look upon peace signs and doves as quaint artifacts, not as a button that once could get you worked beaten to hell. Wars get old too, the rough edges get sanded down, sanitized. Unless you’re in select company. Get in the right space with the right people, and the blood’s still fresh. It’ll never dry.

And in Saigon—forever Saigon—the girls in ao dais still ride their bicycles up the wide boulevards, and they smile behind their hands at old men who cock their heads and pause whenever they hear a helicopter.

HONG KONG – Hugh Van Es, a Dutch photojournalist who covered the Vietnam War and recorded the most famous image of the fall of Saigon in 1975 — a group of people scaling a ladder to a CIA helicopter on a rooftop — died Friday morning in Hong Kong, his wife said. He was 67 years old.

Van Es died in Queen Mary Hospital in Hong Kong, where he had lived for more than 35 years. He suffered a brain hemorrhage last week and never regained consciousness, his wife Annie said. Hospital officials declined to comment.

Slender, tough-talking and always ready with a quip, Van Es was considered by colleagues to be fearless and resourceful. He remained a towering figure after the war in journalism circles in Asia, including his adopted home in Hong Kong.

“Obviously he will be always remembered as one of the great witnesses of one of the great dramas in the second half of the 20th century,” said Ernst Herb, president of Hong Kong’s Foreign Correspondent Club.

“He really captured the spirit of foreign reporting. He was quite an inspiration,” Herb said.

He arrived in Hong Kong as a freelancer in 1967, joined the South China Morning Post as chief photographer, and got a chance the following year to go to Vietnam as a soundman for NBC News, which he took. After a brief stint, he joined The Associated Press photo staff in Saigon from 1969-72 and then covered the last three years of the war from 1972-75 for United Press International.

His photo of a wounded soldier with a tiny cross gleaming against his dark silhouette, taken 40 years ago this month, became the best-known picture from the May 1969 battle of Hamburger Hill.

And his shot of the helicopter escape from a Saigon rooftop on April 29, 1975 became a stunning metaphor for the desperate U.S. withdrawal and its overall policy failure in Vietnam.

As North Vietnamese forces neared the city, upwards of 1,000 Vietnamese joined American military and civilians fleeing the country, mostly by helicopters from the U.S. Embassy roof.

A few blocks distant, others climbed a ladder on the roof of an apartment building that housed CIA officials and families, hoping to escape aboard a helicopter owned by Air America, the CIA-run airline.

From his vantage point on a balcony at the UPI bureau several blocks away, Van Es recorded the scene with a 300-mm lens — the longest one he had.

It was clear, Van Es said later, that not all the approximately 30 people on the roof would be able to escape, and the UH-1 Huey took off overloaded with about a dozen.

The photo earned Van Es considerable fame, but in later years he told friends he spent a great deal of time explaining that it was not a photo of the embassy roof, as was widely assumed.

The image gained even greater iconic status after the musical Miss Saigon featured the final Americans evacuating from the city from the Embassy roof by helicopter. Van Es was upset about the play’s use of the image that he so famously captured, and believed he was ripped off. He had long considered legal action but decided against it.

Born in Hilversum, the Netherlands, Hubert Van Es learned English from hanging out as a kid with soldiers during World War II.

He said he decided to become a photographer after going to a photo exhibit at a local museum when he was 13 years old and seeing the work of legendary war photographer Robert Capa.

After graduating from college, he started working as a photographer in 1959 with the Nederlands Foto Persbureau in Amsterdam, but Asia became his home.

When the Vietnam war ended in 1975, van Es returned to Hong Kong where he freelanced for major American and European newspapers and magazines and shot still photos for many Hollywood movies on locations across Asia.

Van Es, who served as president of the Hong Kong FCC in the early 1980s, was often found holding court at the club, his firsthand accounts and opinions sought out by reporters new and old.

“His presence there is really memorable,” Herb said.

He covered the Moro rebellion in the Philippines and was among the horde of journalists who flew into Kabul to cover the Soviet invasion of Afghanistan. CBS cameraman Derek Williams got through immigration but everyone else was stopped and held in the transit lounge.

“As they were then being shepherded back to the plane,” Williams recalled, “Hugh saw an open door to his left, and just made a break for it with only his camera bag. He ran through the terminal and jumped into a taxi to try to get to the Intercontinental Hotel.”

Afghan police arrested van Es, but the plane had taken off so they took him to the hotel. Williams said he and van Es spent three days in Kabul before being expelled. Van Es’ still photos, for Time magazine, were the first to capture Soviet tanks rolling into Afghanistan.

He and his wife, Annie, whom he met in Hong Kong, were married for 39 years. He is survived by Annie and a sister in Holland.