So you may have noticed that after midnight, the White Eagle posts stopped. Yes: we were all eaten by ghosts. The end.

Actually, around 1:30, it was kind of a like a taut stretch of twine snapped, and everyone became exhausted and called it a night. That’s no surprise: we’ve been in rehearsal until 11:00 PM almost every night for the last two weeks, and people were beat. When they left, they also took their laptops with them, hence no more blog posts.

And what about yours truly, dear reader? What happened when just the author and his lovely spouse were left in the White Eagle alone?

Sad to say…or maybe glad to say…nothing. That was because, even as blown-out tired as I was at that point, I suddenly realized something I hadn’t anticipated: I was never going to be able to sleep in this place. I’d lie there awake, listening for every stray sound. At one point, alone in the room, I could hear a bag of chips uncrinkling, so hypersensitive I had become. And it was like, hey, fun’s fun, but I have two more 80-hour weeks ahead of me. I have to crash.

So around 2:00 or 2:30, we said goodnight to the Eagle and its residents, transitory or permanent. In summation, we heard nothing except a rock’n’roll band coming up through the floorboards, saw nothing untoward, and experienced one (briefly) very cold restroom. We watched half of the “The Haunting” and told some good ghost stories. And we had some laughs and shared time with friends.

Is the Eagle haunted? Well…I’ll say this: there is a melancholy to that second floor, where so much history, some of it painful, went down. The McMenamins have lovingly restored it, with wit and a goofy charm, but there’s no hiding that sadness, that people spent their lives (and sometimes ended them) in those narrow, claustrophic rooms with tall ceilings that have weirdly ominous cracks. And I don’t know whether it’s the power of suggestion or a reality, but I couldn’t help but feel something’s going on there. What it is, I have no idea. But, honestly, I wasn’t sorry to leave. I was a little relieved, if for no other reason than I could soon sleep.

In short, if the White Eagle isn’t haunted, it ought to be.

P.S.: When we finally got home, I bundled up and went out back to have my customary pre-bedtime pipe of tobacco, a time I use to sort of mull over the day and sometimes write in my head. And I was sitting out there, sorting through the evening’s memories, when I thought: hell, it’s not that cold out here. I thought it’d be much worse. That’s when it hit me–bang: the cold I’d felt in the White Eagle’s restroom was far colder than the outside night air. And somewhere, I could feel someone…or something…snicker. 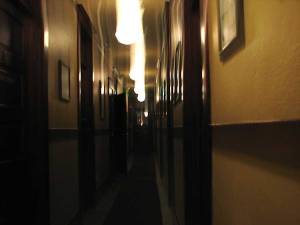 See you at the show.

Steve Patterson has written over 50 plays, with works staged in Portland, Los Angeles, Chicago, Detroit, Austin, Tampa, and other U.S. cities as well as in Canada and New Zealand. His works include: Waiting on Sean Flynn, Next of Kin, Farmhouse, Malaria, Shelter, Altered States of America, The Continuing Adventures of Mr. Grandamnus, Bluer Than Midnight, Bombardment, Dead of Winter, and Delusion of Darkness. In 2006, his bittersweet Lost Wavelengths was a mainstage selection at Portland Center Stage's JAW/West festival, and, in 2008, won the Oregon Book Award (he also was an OBA finalist in 1992 and 2002). In 1997, he won the inaugural Portland Civic Theatre Guild Fellowship for his play Turquoise and Obsidian. END_OF_DOCUMENT_TOKEN_TO_BE_REPLACED
This entry was posted on Saturday, January 19th, 2008 at 7:04 pm and tagged with Uncategorized and posted in Uncategorized. You can follow any responses to this entry through the RSS 2.0 feed.
« After Midnight
The Dead are Coming »