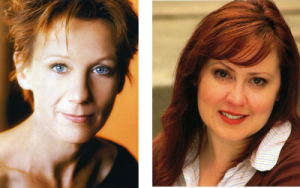 If you see the two women above, be forewarned: they are extremely talented, ruthlessly funny, and frighteningly intelligent. They’re also doing a show called Live Nude Fear! which runs for one more week at Portland’s IFCC (the link below provides the details). I will admit that they’ve been friends of mine for years and we’ve worked together on several memorable theatre projects, but their poor choice in friends doesn’t diminish that they’ve put together a terrific show that, from time to time, veers delightfully out into the ozone, where the air gets weird. Steve sez check it out:

Steve Patterson has written over 50 plays, with works staged in Portland, Los Angeles, Chicago, Detroit, Austin, Tampa, and other U.S. cities as well as in Canada and New Zealand. His works include: Waiting on Sean Flynn, Next of Kin, Farmhouse, Malaria, Shelter, Altered States of America, The Continuing Adventures of Mr. Grandamnus, Bluer Than Midnight, Bombardment, Dead of Winter, and Delusion of Darkness. In 2006, his bittersweet Lost Wavelengths was a mainstage selection at Portland Center Stage's JAW/West festival, and, in 2008, won the Oregon Book Award (he also was an OBA finalist in 1992 and 2002). In 1997, he won the inaugural Portland Civic Theatre Guild Fellowship for his play Turquoise and Obsidian. END_OF_DOCUMENT_TOKEN_TO_BE_REPLACED
This entry was posted on Monday, May 18th, 2009 at 3:14 pm and tagged with Live Nude Fear, Lorraine Bahr, Ritah Parrish, smarts, talent, theatre and posted in theatre. You can follow any responses to this entry through the RSS 2.0 feed.
« Photographer who took famous Saigon photo dies
Chocolate+Jesus »