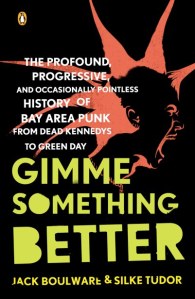 I’ve been away from the blog for awhile for (I think) a reasonable reason: I’ve been writing. Seriously.

I took the morning off from writing and spent some time reading my friend Jack Boulware’s very sharp and funny book Gimme Something Better: The Profound, Progressive, and Occasionally Pointless History of Bay Area Punk from Dead Kennedys to Green Day. You should check it out: it’ll make you want to immediately dye your hair green and stick a safety pin through your cheek.

I felt like I had the carte blanche to blow off the muse for the morning because yesterday I finished typing up Immaterial Matters, a new, full-length drama with which I am very, very pleased. I’m never a very good judge of my own work. First off, you’re always in love with a play when you’re writing it, even if it’s putting you through fits. Second, others often really like the stuff I end up a little indifferent to, and the work I become besotted with tends to be the stuff that generates an “eh” from others. I have no explanation for this, other than I have perverse taste. Sometimes, it ends up being vindicated; sometimes it just stays perverse.

But this one feels a little different. Writing’s generally hard, hard work, even when it goes well, but this thing was just a breeze from beginning to end. In fact, it was coming so easily that it began to freak me out—like I’d inevitably sit down with the notebook one day and be suddenly dry, dry, dry. Never happened. It was always there for me when I called upon it, which is a joy. It continually surprised me—another good sign—and, when I was typing it up (I write all my drafts in longhand, then type them, revising as I go), I’d slightly change a line, then pause and change it back to the original. This almost never happens.

So I don’t know. But I’m guardedly optimistic. As to the play itself: it’s set in 1880s, and it’s about a photographer, death, and a ghost.

And that’s about all I’m saying for now.