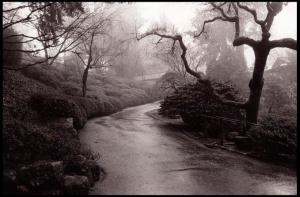 Reading, of late, about one Rod Serling. Writer. Producer. Creator. A man who seemed to have everything going for him. And then….

Yeah, well…and then shit happens. Apparently, he pretty much worked and smoked himself to death, and he died early. Just like his father. A fate that always haunted him. There’s an object lesson for you: sometimes you can’t see the obvious because you don’t want to see the obvious. Or because it scares you too much. And, because you can’t see it, you doom yourself to it. The kind of thing that happens in…the Twilight Zone.

Man. That’s one hell of a voice the guy had. Every writer follows a different process, but, once I hear a character’s voice, a door opens into the story. I can’t explain it—that’s just how it happens for me. And if you hear Serling or watch his work, that voice sticks to you. Pretty soon it won’t let you go. And then people wonder why you’re talking so weird. So ironically. Snapping off every word. Holding for dramatic effect. Like…this.

Which is a kind of genius. It’s a brand. If you like Rod Serling and the strange world he became associated with through his remarkable television show The Twilight Zone, then you know what you get when you hear that voice. The poignant side? With time, that’s all anyone wants to hear. You’re stuck with it. They won’t let you change it and grow. It can also become cruel when your audience tires of that voice. If it becomes too familiar. Some in the audience just wait for Dylan’s old songs. Some won’t listen to the Stones because they don’t sound as good as they used to. Why? They repeat themselves. And because the listeners themselves aren’t as young as their memories.

It’s a tough choice: give people what they want or risk repeating yourself and burning them out. It seems the artists who transcend that operate with very good compasses: they know who they are, and part of their brand is trying new stuff. You like them because you don’t know what you’ll get, but it’s likely to be good. It’s said Picasso could own anything he wanted if he could paint it, but he continually tried new forms, excelling at them and putting his “Picasso” stamp on them. Part of Tom Waits’ genius seems lie in the continual search for new sounds. It doesn’t always work, but, a lot of times, it’s very, very good. And there’s always that little bit of that Tom Waits DNA that keeps you coming back. There’s magic, and there’s tragic magic, and you have to risk one to achieve the other.

The Twilight Zone was wondrous. I don’t even think we knew how good it was at the time. I was too young to remember its debut seasons, but I grew up with it in syndication. I was not, however, too young for Night Gallery, Serling’s kind of reboot of The Twilight Zone. By the time that came out in the Seventies, Serling’s outlook had darkened, and the show reflected that darkness. He wasn’t entirely in charge of the program, as he was with The Twilight Zone, and sometimes it slipped into camp. But I can’t tell you how much I looked forward to Night Gallery evenings. (They always seemed to be rainy.) You didn’t know where you would go, and sometimes you went to very dark places indeed. Very dark. Which, to me were the coolest, most mysterious places to be, and very different than…than being a geeky kid in a small town. In the Pacific Northwest. Where it seemed some winters that the sun never made it all the way across the sky. Where the rain and the fog blurred the edge of everything. Blunted the colors. You didn’t realize how fabulously beautiful everything around you was until the sun came out, but sun didn’t last long. I came to like images with a little blur to them. Where you couldn’t quite be sure of what you were seeing. You had to guess, relying on your imagination to complete the picture.

What did the Night Gallery look like? Like an actual gallery, it varied. They hung a lot of paintings in three years. Sometimes, they didn’t turn out that well, and, looking at them now, you kind of shrug, shake your head. Yeah…well, they tried. And they were on deadline. Sometimes they retain their power and mystery. If that sort of darkness interests you (and it’s okay if it does), take a look.

Somewhere in there, Night Gallery stamped me with its mark, and I came to enjoy diving into that deep place where it really gets strange and frightening. I don’t give a damn about slasher pics or much of the stuff that passes for horror. But the fantastic, the uncomfortable, the…haunted, where the hero doesn’t always walk out in the sunshine at the end: it took ahold of me. In some ways, I’ve been writing about ever since. A writer friend says my work is haunted. (Maybe it’s me that’s haunted.) But that darkness, that blur, seems to distinguish my writing and photographs. Maybe that’s my brand.

To me, it just feels like beneath the surface of ordinary life, things remain hidden. Jung called it the unconscious—he was a scientist; so that’s kind of antiseptic. But there’s nothing clean or classifiable about the genuine intersection of the hidden and the ordinary, between dreams and reality. Some pretty good stories happen there. And maybe they show us that the world is not only more complex than we know, but more complex than we can know.

That’s paraphrasing Einstein, whose brand became synonymous with genius. He died four years before The Twilight Zone went on the air. Would he have watched it? I like to think he would have. Marking Twilight Zone nights on his calendar. We’ve come to find that when you take apart the smallest operating particles of reality, they don’t always act as suspected. Sometimes they’re here, but only for the briefest moments, and, in those nanoseconds, they don’t play by the rules. It appears that a twilight zone occurs within every thing. Within all of us. All the time.

There’s something to walk away with…Serling. You did good.

One thought on “Revisiting “The Twilight Zone””