I’m working through a wealth of images from Italy–it’s literally a photographer’s paradise. (And let’s take a moment to extend our heartfelt sympathy to the lovely people of Italy at this very difficult time.) It’s going to take me awhile before I’ll get the best of the Italy pictures together, but here’s a handful just from Rome. All were taken with the fabulous Canon G10. If you click on the image, you can see it in greater detail. 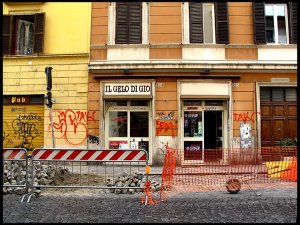 Steve Patterson has written over 50 plays, with works staged in Portland, Los Angeles, Chicago, Detroit, Austin, Tampa, and other U.S. cities as well as in Canada and New Zealand. His works include: Waiting on Sean Flynn, Next of Kin, Farmhouse, Malaria, Shelter, Altered States of America, The Continuing Adventures of Mr. Grandamnus, Bluer Than Midnight, Bombardment, Dead of Winter, and Delusion of Darkness. In 2006, his bittersweet Lost Wavelengths was a mainstage selection at Portland Center Stage's JAW/West festival, and, in 2008, won the Oregon Book Award (he also was an OBA finalist in 1992 and 2002). In 1997, he won the inaugural Portland Civic Theatre Guild Fellowship for his play Turquoise and Obsidian. END_OF_DOCUMENT_TOKEN_TO_BE_REPLACED
This entry was posted on Thursday, April 9th, 2009 at 3:56 am and tagged with Italy, Rome and posted in Canon G10, photography. You can follow any responses to this entry through the RSS 2.0 feed.
« A Simple Wish for Theatre
Doors and Windows into the Past »

3 responses to “Images from Rome”