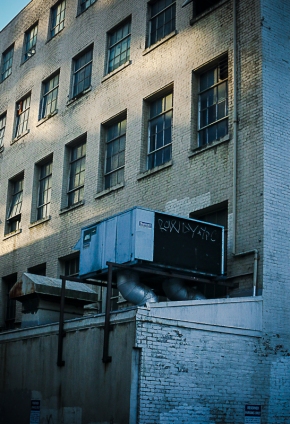 A late winter afternoon–after a stretch of rain, the air still thick. Winter in the Pacific Northwest often limits you to shooting detail, given the long overcast stretches. But, when it clears, it gives you this full, rich light and color more akin to the semi-tropics, plus long shadows. Maybe the moisture content in the air; it somehow bends the light.

Here we have the golden hour plus: the warm light tinged with winter blues. The photo’s seem some post-production work, mostly to render it the way I saw it. Or at least how I remembered it. There’s no telling how far that can stray. Memory’s it’s own kind of filter.

The site–the Modish Building in downtown Portland–holds a special meaning for me. My first play–Controlled Burn–was produced on the fourth floor, in a sort of underground art gallery, with the artists squatting on site…not us, we came in as guests. Very punk, man! Kind of. They did throw some great parties. They also had limited gear available. The sound system was fantastic, and there must have been 50 cues, but our lights consisted of slide projectors and flashlights with colored gels over the lenses (and a silver plastic balloon that served to create a very cool watery effect). We took our set up in a rickety industrial elevator than ran so slow that you could reach out and touch the wall as it passed. We called if the David Lynch Memorial Elevator. We had to bring audiences up to the fourth floor in batches of ten. Luckily, the fire inspector never visited us.

With time, you learn. Back then, I had no idea. I remember Kyle Evans (who helped found Pavement Productions) and I attended PATA auditions when looking for actors. We knew nobody in the theatre community, nobody knew us, but they treated us as equals, and we ended up working with some very cool people like Sherilyn Lawson, Marty Ryan, and Catherine Egan (as a shamanistic dancer).

That’ll be 25 years ago this coming September. First play. Birth of Pavement Productions (I certainly had no idea that would last for 18 years). And my first review–the Oregonian compared me to a young Sam Shepard. They also said the play was kind of a mess–really, it was more performance art–and dubbed it “Uncontrolled Burn.” And thus the pattern: the critic give, and critic taketh away. Still, they couldn’t have made me happier unless they’d compared me to Beckett or Ionesco.

One thought on “Photographica: Late Afternoon and into the Past”